Taste of Vista has become one of my favorite events to attend each year. Come out with me and experience the 11th Annual Taste of Vista, Wednesday, June 19, 2019 from 5:00pm-8:00pm. Enjoy food and drink from Vista restaurants, breweries, wineries and distilleries, all while enjoying live music scattered throughout the Historic Downtown. The Food & Beverage ticket holders will receive a taste cup. Plan early and scoop your tickets up now.  You can purchase here. 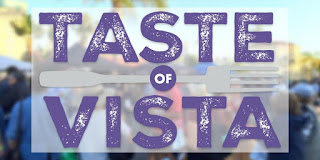 Vista, CA (February 28, 2019) – For its fourth season of concerts and movie nights, Moonlight Presents will offer an expanded calendar of events at the City of Vista’s Moonlight Amphitheatre, the picturesque outdoor venue located within Brengle Terrace Park. Generously sponsored by Vista-based Dr. Bronner’s, concert packages and single tickets will go on sale Sat., March 9 by phone at (760) 724-2110, online at moonlightstage.com, and in person at VisTix.

“Moonlight Presents was intended to expand the amphitheatre’s offerings outside of our summer season of Broadway musicals,” said Managing Director Colleen Kollar Smith. “Last year, we grew our audience by more than 40 percent over the previous years’ attendance. We are thrilled that our community is embracing The Moonlight as a year-round entertainment destination. With the generous underwriting from Dr. Bronner’s, we are able to offer an eclectic line-up in 2019 which to date is our largest presenting season.”

The line-up:
Classic Albums Live
Friday, April 12, 2019: The Eagles’ Hotel California
Gates: 6 pm
Show: 7:30 pm
Saturday, April 13, 2019: Fleetwood Mac’s Rumours
Gates: 6 pm
Show: 7:30 pm
Ticket Price Range for Each Concert: $15 - $40
Classic Albums Live returns to The Moonlight stage with two ultimate albums, The Eagles’
“Hotel California” and Fleetwood Mac’s “Rumours.” Go back in time with this perfect re-creation of these unforgettable timeless albums. Classic Albums Live has become the ultimate destination for music lovers wanting to hear the greatest albums performed live. Some of the world’s most skilled musicians and vocalists will re-create “Hotel California” and “Rumours” live, note for note, cut for cut, followed by a second act of Greatest Hits from each band. Friday night, enjoy hit Eagles’ tracks like the GRAMMY® winning “New Kid in Town,” as well as deep cuts like “Wasted Time.” You’ll want to return on Saturday to enjoy the thrilling energy and genius of Fleetwood Mac’s hits “Go Your Own Way,” “The Chain,” and “Dreams.” “Hotel California” and “Rumours” will play exactly as you remember on the turntable.

May the Fourth Be With You Celebration!
Saturday, May 4, 2019
Gates: 6 pm
Concert: 6:30 pm
Show: 8 pm
Tickets: $10 & $15
Star Wars: The Force Awakens on the big screen along with the hottest cantina band, The Millennial Falcons, on stage before the movie.

Roger Clyne & The Peacemakers
Saturday, May 11, 2019
Gates: 6 pm
Show: 7:30 pm
Ticket Price Range: $15 - $40
Hailed as one of the most exciting live acts on the road today, Roger Clyne & The Peacemakers are musical beacons of the Southwest fueled by witty and insightful lyrics, crunching guitar riffs, a dynamic rhythm section, and tequila. Bridging the gap between rock and roll, roadhouse Americana, and the sound of the southwest, Roger Clyne & The Peacemakers have carved out their own path for more than 15 years. They’ve traveled the world, sent eight albums to the top of the Billboard Internet Sales Chart, launched an annual music festival in Mexico, started their own line of ultra-premium tequila, and built a global community of music-lovers and peacemakers – all the while remaining 100% independent.

The PettyBreakers
Saturday, May 25, 2019
Gates: 6 pm
Show: 7:30 pm
Ticket Price Range: $15 - $40
The PettyBreakers is the nation’s premiere Tom Petty and the Heartbreakers tribute band. The band accurately re-creates the sights, sounds, and concert experience of a Tom Petty concert. You will hear all of the classics that you know and love: “American Girl,” “Break Down,” “Free Falling,” “Mary Jane’s Last Dance,” and more. If you are a Tom Petty fan, you will not want to miss this evening that honors the music of the legendary American musical icon.

John Waite
Saturday, July 6, 2019
Gates: 6 pm
Show: 7:30 pm
Ticket Price Range: $22 - $57
70s and 80s rock icon John Waite and his band will perform his catalogue of hits from his 40-year career as a solo artist and his time as lead singer of the bands The Babys and Bad English. His catalogue of hits includes the #1 worldwide hit “Missing You,” The Babys’ “Isn’t It Time,” and Bad English’s “When I See You Smile,” which rank amongst some of his biggest international hits and are still heard on radio today. Others songs include “Tears,” “Change,” “These Times Are Hard for Lovers,” “Every Step of the Way,” and “If Anybody Had a Heart.” John Waite’s talent for power ballads and driving arena rock occasionally touched on new wave-styled power pop making him a fixture of the rock and roll scene. John Waite continues to forge his own singularly personal path of celebrating the present while engaged by the promise of the future. The story is far from over for the Lancaster, England-born rock star/balladeer/storyteller who was inspired onto his musical path by blues, soul and country along with a deep connection to the Celtic folk music of his homeland.

Into the Woods in Concert
Saturday, October 5, 2019
Gates: 6 pm
Show: 7:30 pm
Ticket Price Range: $10 - $45
James Lapine and Stephen Sondheim take everyone’s favorite storybook characters and bring them together for a timeless, yet relevant, piece. This one-night-only fundraising concert version of this modern classic brings to life the story of a Baker and his wife, who wish to have a child; Cinderella, who wishes to attend the King’s Festival; and Jack, who wishes his cow would give milk. When the Baker and his wife learn that they cannot have a child because of a Witch’s curse, the two set off on a journey to break the curse. Everyone’s wish is granted, but the consequences of their actions return to haunt them later with disastrous results. With an all-star cast of Moonlight favorites and orchestra, this is an evening you won’t want to miss! This is a co-production between Moonlight Stage Productions and the Moonlight Cultural Foundation. Proceeds benefit the Moonlight Cultural Foundation. Please note: tickets for this performance will go on sale on March 30, 2019.

Movie Night: The Goonies
Friday, October 25, 2019
Gates: 5:30 pm
Show: 7 pm
Tickets: $5 and $10
Bring the family to watch a group of misfit kids who set out to find a pirates’ ancient treasure in this great 80s classic. Goonies themed activities before the movie!

Sweet & Tender Hooligans: The Ultimate Tribute to Morrissey and The Smiths
Saturday, October 26, 2019
Gates: 6 pm
Show: 7:30 pm
Ticket Price Range: $15 - $40
Los Angeles-based Sweet and Tender Hooligans, hailed as the ultimate tribute to Morrissey and The Smiths, have delivered for more than two decades a finely crafted show that pays homage to the legendary singer and British indie band. Performing to sold-out crowds throughout the US, Mexico, and the UK, front man Jose Maldonado channels Morrissey so convincingly that Moz himself has even jokingly taken the stage with the opening line, “Hello, we are the Sweet and Tender Hooligans and I’m Jose.” From their era-perfect style to Maldonado’s Morrissey-inspired coif, the band never fails to satisfy even the most rigorous Smiths purists.

The Doo-Wop Project
Saturday, November 9, 2019
Gates: 6:00 pm
Show: 7:30 pm
Ticket Price Range: $15 - $40
Back by popular demand at The Moonlight, The Doo-Wop Project begins at the beginning: tracing the evolution of Doo-Wop from the classic sound of five guys singing tight harmonies on a street corner to the biggest hits on the radio today. In this epic concert, go on a musical journey from foundational tunes of groups like The Crests, The Belmonts, and The Flamingos through their influences on the sounds of Smokey Robinson, The Temptations, and The Four Seasons all the way to DooWopified versions of modern musicians like Michael Jackson, Jason Mraz and Maroon 5. Featuring stars of Broadway’s smash hits The Jersey Boys and Motown: The Musical, the Doo-Wop Project brings unparalleled authenticity of sound and vocal excellence to re-create — and in some cases entirely reimagine — some of the greatest music in American pop and rock history!

Movie Night: Elf
Saturday, December 7, 2019
Gates: 5:30 pm
Show: 7 pm
Tickets: $10 & $15
Experience the adventures of Buddy the Elf in this modern Christmas Classic on the big screen! Arrive early for a snow play area for the kids and other holiday-themed activities for the family.

Top of the World: A Carpenters Holiday Concert
Saturday, December 14, 2019
Gates: 5:30 pm
Show: 7 pm
Ticket Price Range: $15 - $40
This Carpenters tribute band brings the most authentic versions of the original duo’s music to the stage. No doubt you will be singing along as they perform holiday hits along with Carpenters favorites like Close To You, We’ve Only Just Begun, Rainy Days and Mondays, Yesterday Once More, Top of the World, Superstar, and more. Lead singer Debbie Taylor captures the warm tones and contralto range that made Karen’s voice so unique. Sit back and enjoy as Debbie and her band take you on a nostalgic journey through the Carpenters Christmas album and other hits while sharing some of the backstories behind the music.

Barb
My name is Barb and I want to welcome you to Around The Town. My goal is to encourage and inspire you to get out there and experience more of what San Diego has to offer and to try new things with your family and friends. Thanks for stopping by and I hope you like what you find. Please share this blog with your friends and family, and sign up to receive daily updates to your email inbox. Check for Around The Town on facebook and my website as well.